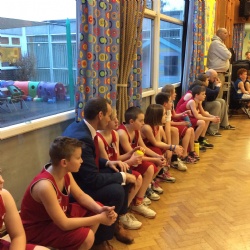 An interview with Reverand Chris, details of the Swimarathon and yet more basketball is included in the report below.

This week I interviewed Reverend Chris, the vicar of the local church, The Church of  the Ascension. He comes in once a month to tell stories about Maximus Mouse, a popular character with both staff and pupils. He says that he enjoys coming to tell stories he finds the school very welcoming with well behaved children.  Reverend Chris likes writing creatively because he thinks it makes the point memorable, entertaining and sometimes even funny. Reverend Chris has a Christian point of view but says that they are open for everybody to consider and they always include a Bible story. We are all looking forward to when Reverand Chris tells another of Maximus' many adventures next month. This week's story was about helping others.

On Friday our swimming team headed to the Meres centre to take part in the Swimarathon. The team included Alexander Ward, Conner Smith, Jacob Britton, Curtis Durham, Mr Haigh and Mr Mason. The Mayor opened the event by sounding a horn and we finished with an impressive tally of 142 lengths, beating our all time best of 138 lengths set two years ago.

On Thursday 5th January we played basketball at Canarvon schoolin Bingham.   We won against both Canarvon and Lowdam. First we beat Canarvon's score of 18, with the ball finding the basket 13 times to net 26 points and a victory for Belton Lane. Next we played Lowdam, a team we have previously played and beaten in very competive games. In a convincing win for Belton Lane we passed with greater accuracy and kept possesion for longer periods of time than in our first match. The final result was 37 - 5 to Belton. We have now won six matches in a row this season, and we are hungry for the taste of more success.