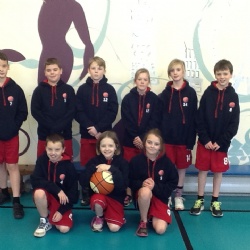 On 8th January our basketball team headed to Bingham where we played our first games of the season. We won them both!

These games were important for many. They were some of Tia’s and Sarah’s first competitive matches and Jacob’s, Evan’s and Luca’s third year of participating in the sport.

The first of the two glorious matches ended in victory for Belton Lane with a score of 38 – 18 against Canarvon School. The second game, also against Canarvon, finished much the same way. The next day we received an email from Coach Smith (referee) saying simply: “The team was awesome.”

We are all eagerly awaiting our next match, excited about the chance to play more competitive games.

Next Match is at Holy Trinity School in Newark - Thursday 22nd January 2015.